Can you believe 2017 is already coming to an end? We’re excited to say we’re wrapping up another wonderful year in the note investing world. This year had a lot of huge accomplishments for us. Not only did we have another great year for our note investments, but we launched Note Investing Academy, a brand new 100% online note investing education. Our biggest celebration would have to be leaving our full time jobs to pursue our dream of full time travel. We now work and travel North America on our fifth wheel Toy Hauler (RV)!

Below is the summary of our action and results within our Note Investing business, Seasoned Funding, LLC in 2017. We’re very content with the number of deals as well as the overall profit and ROI we received on the deals we’ve closed. A big part of being note investors for us, is the time freedom it allows. We like to do around 20 deals a year. We found that’s the perfect number more than support us financially while allowing us the time to do all of the fun things we want as we travel. Could we do more deals? Of course! But that would mean putting more work in – and we’re pretty good where we’re at for the time being! Take a look for yourself. 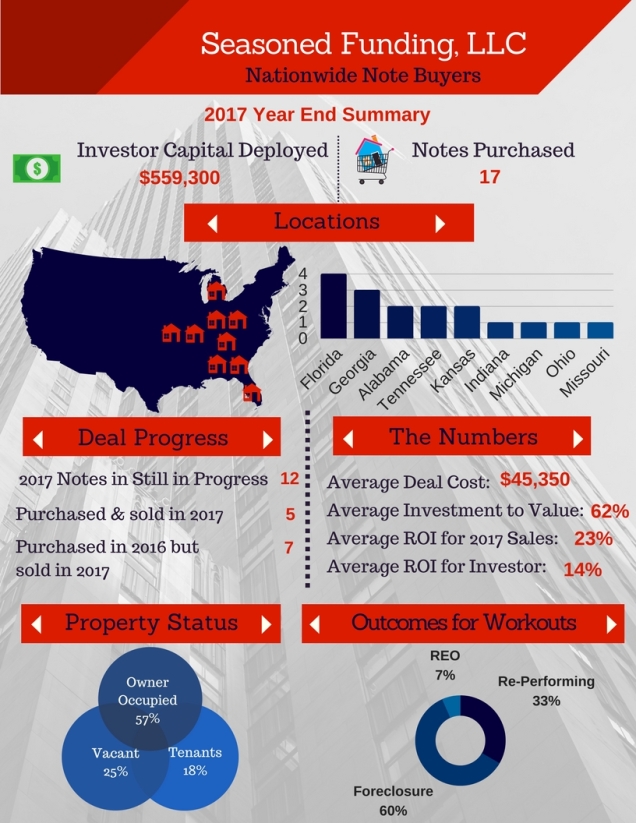 2017 sure was an incredible year and we’re excited to see all of the amazing things 2018 is sure to bring! Wishing you all a successful and prosperous 2018!

Lately in the Secondary Note Market, a lot of Note Buyers have been purchasing non-performing or performing contract for deed’s/land contracts instead or in addition to traditional bank created 1st or 2nd lien non-performing notes. I’m sure each investor can give you reasons why they are or aren’t buying Non-Performing CFD’s (contract for deeds), but personally, we are loving the opportunity they are bringing to the market for us a Nationwide Note Buyers. While they have a lot of benefits there are negatives involved as with any investment. This post will walk you through why we’re buying as many of these as possible and how some of the benefits/negatives have effected us. 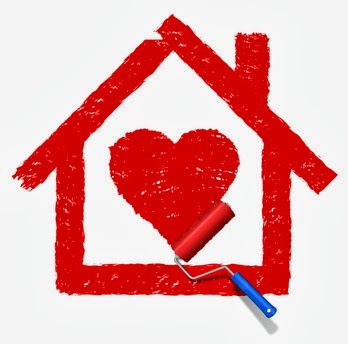 Before we dive in, it’s imperative that you understand what a Contract for Deed is. A Land Contract Installment, also known as a Contract for Deed, is a form of seller financing. It is similar to a mortgage, but rather than borrowing money from a lender or bank to buy real estate, the buyer makes payments to the real estate owner, or seller, who remains on title until the purchase price is paid in full. It is a tool that can allow buyers who either don’t qualify for traditional lending options or who want a faster financing option to purchase property.

The main seller of CFD’s on the secondary market is one large hedge fund that owns A LOT of real estate (almost all CFD’s are being created then sold from this one hedge fund). They buy the properties as REO’s from Fannie or Freddie Mac in bulk, then create a Land Contract Installment with a buyer who likely could not qualify for traditional financing for a variety of factors. Most of the time, they are sold to the buyer in as-is condition.

Take a look at some of our “slam dunk” Contract For Deed Deals below.

3.     Most of the time you can file “Forfeiture” instead of having to Foreclose.

Take a look at some of the worst of our CFD’s.

3.      Know your Laws, Forfeiture is not always the option.

While this is just a drop in the bucket compared to the options and benefits/negatives of buying CFD’s, it does give you a good idea of why our company has benefited from purchasing them, and hopefully help you see how you can benefit too!

Here we go again. A new case study featuring a true win-win-win Note Deal. We bought this note in 2015 as a JV deal with a fellow investor’s IRA. It just recently closed in April 2017, and turned out to be a killer deal for all parties involved! Our company, Seasoned Funding, LLC worked with our JV partner completing all of the work, while they passively received their (way higher than average) return on investment.  We look forward to completing many other home run deals like this in 2017 and beyond. 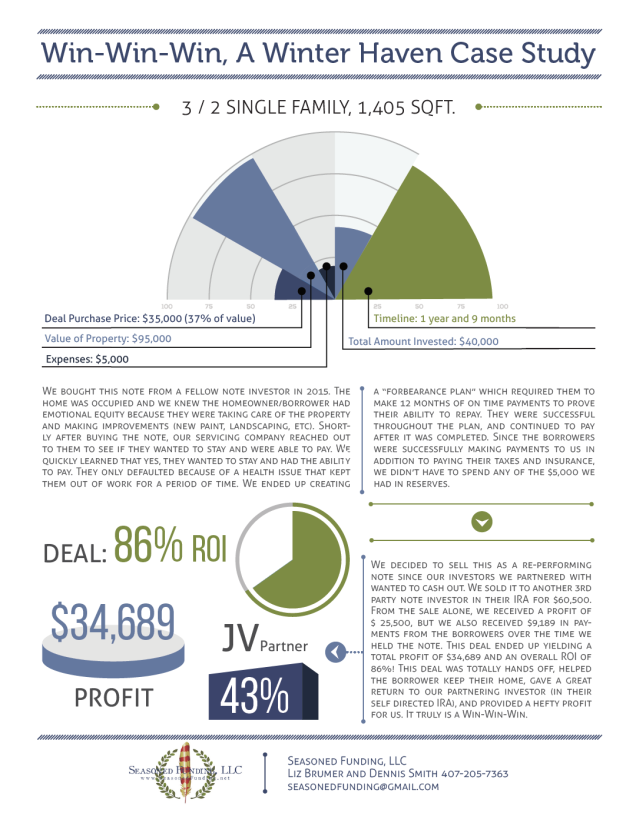 I hope you enjoyed this month’s case study. Stay tuned for more great deals to come! If you’re interest in working with us a lender/investor, please contact us at the information above. We are always looking for new and interested partners to work with.

While my intentions for this year was to blog once a week on my happenings and successes within the business (see the original post here), I realized it was a lot of time and effort for just a few viewers. I decided to stop posting weekly so I could focus that time instead of furthering my business efforts and to be honest, have just a little extra time for me. If you were one of the followers keeping up, I’m sorry for our lack of recent posts, but I am very glad to give you our year end update today! Our 2016 Business Goal was to make $120,000 in pending or actual profit. Not only was it accomplished but we SURPASSED it! The icing on the cake, we didn’t have to take any “pending profit” into consideration. We made a whopping $153,000 in gross profit from our note investments and members at http://www.tapetechs.com and http://www.NoteInvestingClub.com! If your interested in all the details, take a look at our stats below! 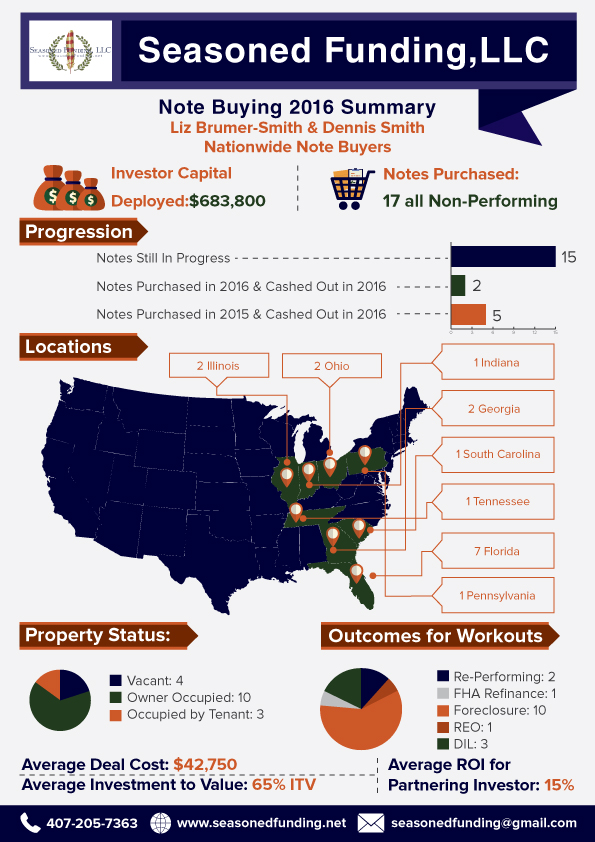 2016 was the most successful year yet. We are beyond excited about our results and are ready for all 2017 has to bring, we know our profits, and deal flow will only continue to increase. We are seeing a huge supply of Non-Performing Inventory and great results with our note deals for both our partnering private investors and our company. If you have idle money sitting in your Roth, IRA, 401K, or savings account, talk to us. We can help increase your return on investment while securing you by real estate. All opportunities are 100% passive. Contact us by email or phone to find out more, 407-205-7363, seasonedfunding@gmail.com

Another great deal, bought and closed. This was deal was completed with a “JV Partner” (Joint Venture) and was completed in a whopping 47 days! Our company, Seasoned Funding, LLC acquired this deal from a note wholesaler. While this was our first time working with them, we have closed several more and are looking forward to completing many other home run deals like this in 2016.

As you can see, this deal was a seriously killer deal. We ended up selling it for way more than we initially anticipated and in less time (both great things). There were some small complications with the original closing because the title company the seller went with did not understand our creative structuring. We securitized our JV partner with a 1st lien private mortgage with a lenders policy which was rejected by the closing company 3 times before they finally had legal review it and accept it!

We got clean up started right away but had set backs once again because it fell during the Thanksgiving holiday. We finally got everything buttoned up and on the market within about 3 weeks, and as you saw it was smooth sailing from there!

If you want to see some of other portfolio holdings, or find out how to get involved with our company and see returns like these, please visit our website, gives us a call, or email us!

I was talking with a fellow note investor the other day about past deals we’ve completed over lunch. While we both swapped stories of great deals and ones that required a bit more work than expected, I was asked if we send out case studies on the deals we do? I’ve heard of doing this before, but had never actually taken the time to make one for our each of our deals, and quickly realized now how terrible that is! I need to continue to put our past deals out there for other investors and interested lenders to see what we’ve done, how we’re doing it, and the real ROI’s were getting on these deals.

So without further adieu, here is our first case study (I say first because there will be many more to come). This was completed with 2 joint venture partners, and worked out completely by us (Dennis Smith and Liz Brumer) owners of Seasoned Funding, LLC and Note Investing Club.com. 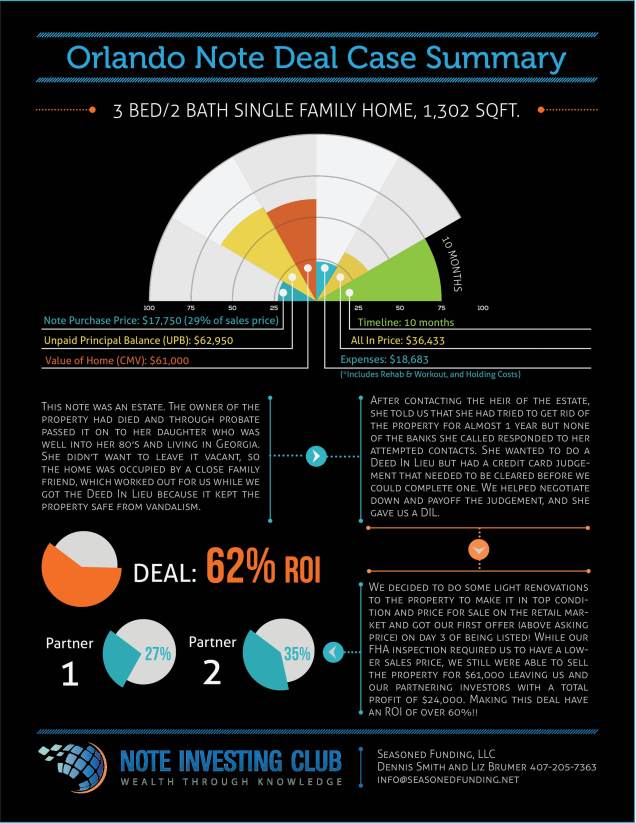 We purchased the note from a fund and began the workout right away. What you don’t see in the case summary is how challenging it was to find the borrower initially. She was living in Georgia but had “relatives” living in the property. Initially, they refused to give us the number, but then realized who we were and what we were trying to do and happily gave us the number to the home she was living in Georgia.

As you saw in the case study, the borrower had a judgement with a credit card company. This took quiet a while to resolve because it required an document signed by the borrower authorizing us to negotiate with the company. When we requested the letter from the borrower, she got scared and worried we were doing some sort of harm and went dark on us for an entire month. Finally, after numerous letters, calls, and pleas with her grandson – she refused to answer the phone, we helped he realize we were there to help and pay off the judgement, we just needed her consent.

It then took another month to receive the release of judgement from the credit card company and get it publicly filed so we had clear title to receive the DIL. This set us back about two and a half months into the work out. All in all it took about 6 months to successfully get the Deed In Lieu from the borrower and have it publicly recorded. From there we did repairs/minor renovations, and got the property on the market. While we got an offer on day 3 of being listed, it was FHA which required an appraisal that put the property $10,000 under what the buyer offered it for! We we’re super bummed about having to lower the price, but still were happy with our ROI.

There were some issues with title when closing, apparently the legal description had been incorrectly recorded for multiple sales and no one had caught it until now. This took another month to rectify which pushed closing back! Talk about frustrating! This deal definitely took longer than expected at 10 months but that’s exactly why you always over estimate timeline, costs, and potential issues that way you over deliver in both the time and results to your partners or lenders. All parties involved were very happy with the outcomes and results and are looking forward to doing more deals!